As Seen in Florida Design: Hypoluxo Island Home is a Modern Marvel

Back to Design Insights
Menu

Design pros often hear the terms “one-of-a-kind” and “original” from their clients, but homeowners who are truly willing to see those adjectives through to fruition are few and far between. However, when a genuine “do-whatever-it-takes” individual does land on their door, the results can defy imagination.

Such was the case with an entrepreneur from Nashville when it came time to build his dream home in South Florida. This tech businessman wanted a modern marvel of a residence that would be the envy of his neighbors. Luckily, he enlisted the right team of professionals to bring his directive to life.

Interior designer Alexis Venanzi of The Decorators Unlimited in Palm Beach Gardens is accustomed to dealing with big personalities. However, this new client was something else: “I still recall the meeting where he said, ‘I want things no one else has. Something Bill Gates would be jealous of.’ I was game.”

Just as equally surprised (and delighted) was the general contractor and builder Josh Khoury of Ocean Blue Custom Homes in Delray Beach. After a meeting with the client, the two decided that the entire project would be driven by one question: Wouldn’t it be cool if?

Charged by the client’s positive attitude, Venanzi (along with co-designer Jason Lynn) and Khoury went to work on an 8,000-square-foot new build with five bedrooms, six-and-a-half baths, and an unattached gazebo complete with an outdoor kitchen and gym.

When discussing the look and vibe of the home, more adjectives were thrown in: “futuristic,” “museum-like,” and “super-clean” are just some of the ones Venanzi remembers. “He wanted drama,” she says. “He wanted wow.”

Based on that and many other lively conversations, the creative team envisioned the interiors and exterior as each took on different aspects of the commission. “He entrusted us to take full control of the project,” says Khoury.

The recurring theme for the residence design, inside and out, was simple geometry. The look starts from the overall rectangular shape of the house, where the primary bedroom is downstairs. A second level offers four guest rooms with their own baths, a game room, laundry facilities, and an office overlooking the pool.

It doesn’t take long for the eye to be drawn to the many custom features the owner insisted on. One such innovation is the thin aluminum fins that stretch from the front door’s threshold nearly to the rooftop. These vertical lines flow throughout the entire home as they adorn the walls in the kitchen, the powder room, and the primary bedroom’s walnut headboard.

Another example is the 23-foot solid oak louvers that hide a vertical linear diffuser in the great room. “The challenge of these contemporary, futuristic, minimal houses is that everything has to be concealed, which adds a layer of complexity,” says Khoury. “I’d say to my tradespeople: ‘If you didn’t bring your laser distance meter, go home.'”

Additional innovative yet invisible touches include custom reglets that allowed LED strips to be embedded in unusual spots (where more traditional homes would have casings, moldings, and baseboards) and drapery pockets to hide yet more diffusers, light fixtures, and speakers. “Every square inch is a specialty,” says Khoury without exaggeration.

As expected, the home is as intelligent as smart homes get. Temperature, music, and lighting can go from sedate to stimulating in seconds through the Control4 system. This automation setup allows ownership of the property’s technological features, whether the person with the codes is on-site or miles away.

As design matters went, Venanzi and Lynn felt it was paramount to incorporate natural elements to contrast the minimalist interior. “I wanted everything to feel like it served a purpose,” says Venanzi. “There are no extras.” To that end, the overall palette is subdued: black, white, and taupe with a few hints of green (mainly in the form of plants).

The flooring is unobtrusive and easy to maintain in a house where dogs reside. White porcelain slabs flow through most of the residence’s footprint, both inside and out, and strike a particular note of elegance in the main connecting hallway framed by glass and black steel.

Instead of artworks, ornamentation (as well as texture and color) comes from living moss canvases and vertical gardens in various rooms.

Other visual surprises appear organically: a spiral staircase enclosed in black panels that connects the house’s three levels; a black accent wall resembling lava formation in the office; and a desiccated tree sculpture in the primary bedroom.

The most relaxing spot in the home is the meditation garden and vast reflecting pool in the center of the main room, visible from just about every angle. “There are color-changing, twinkling fiber optics beneath the water that make it feel like a galaxy at night,” says Venanzi. “It’s rather special.”

Special is the right word indeed. 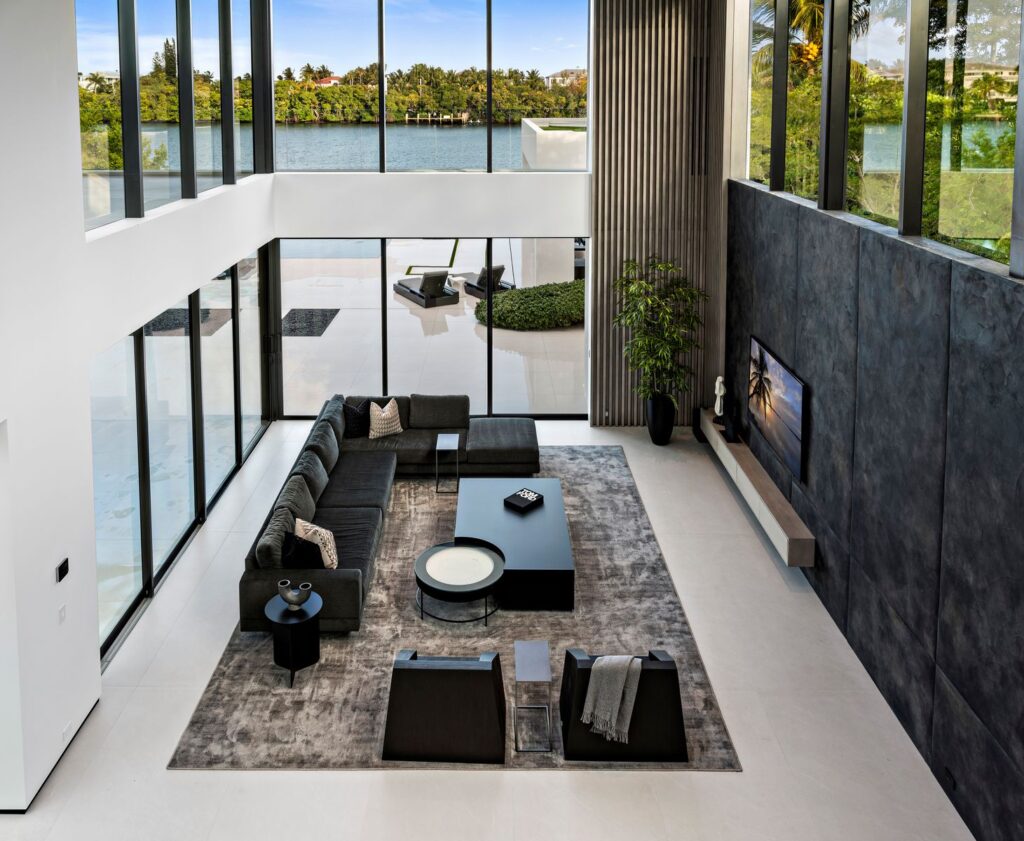 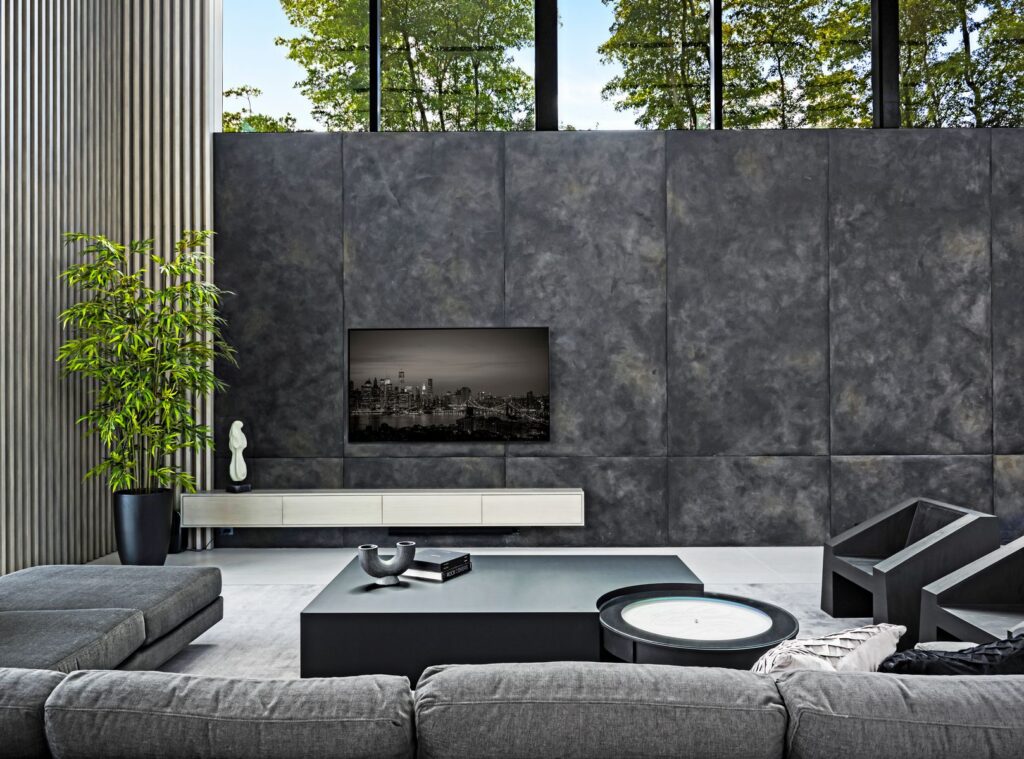 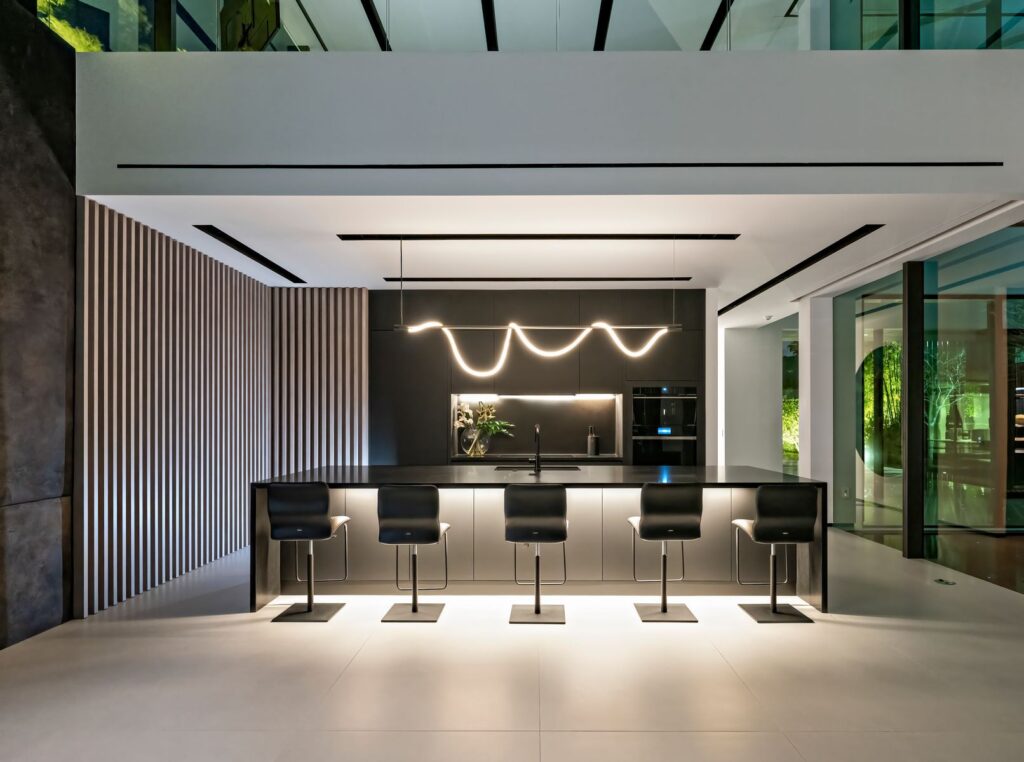 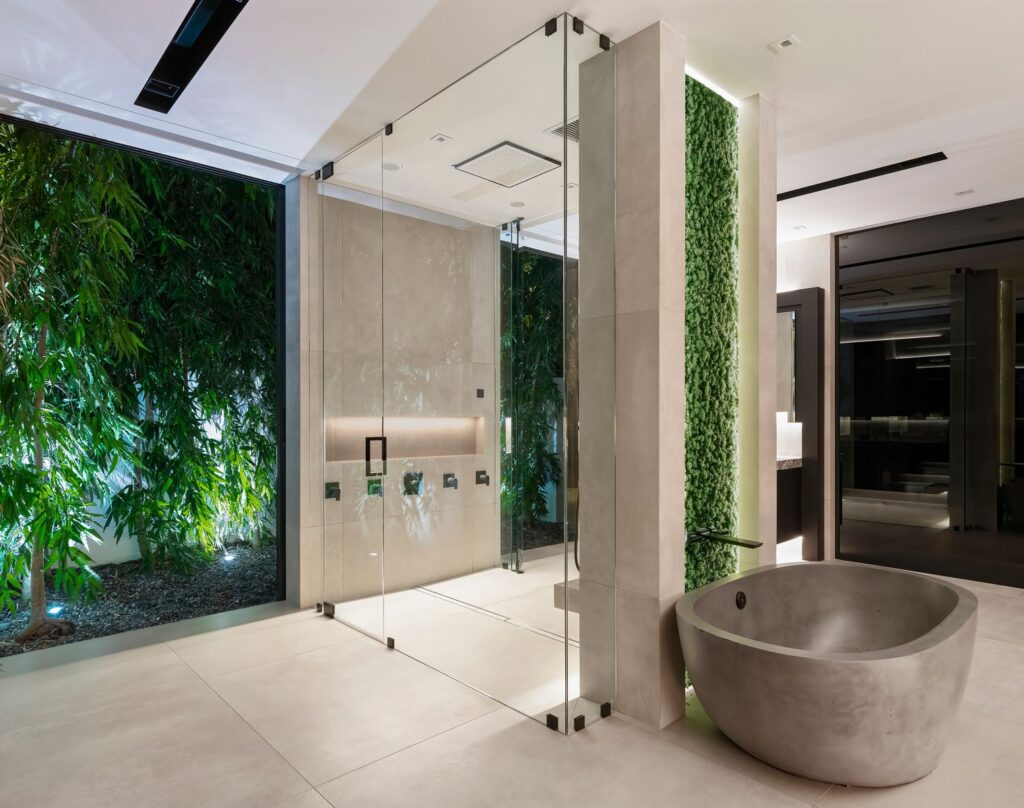 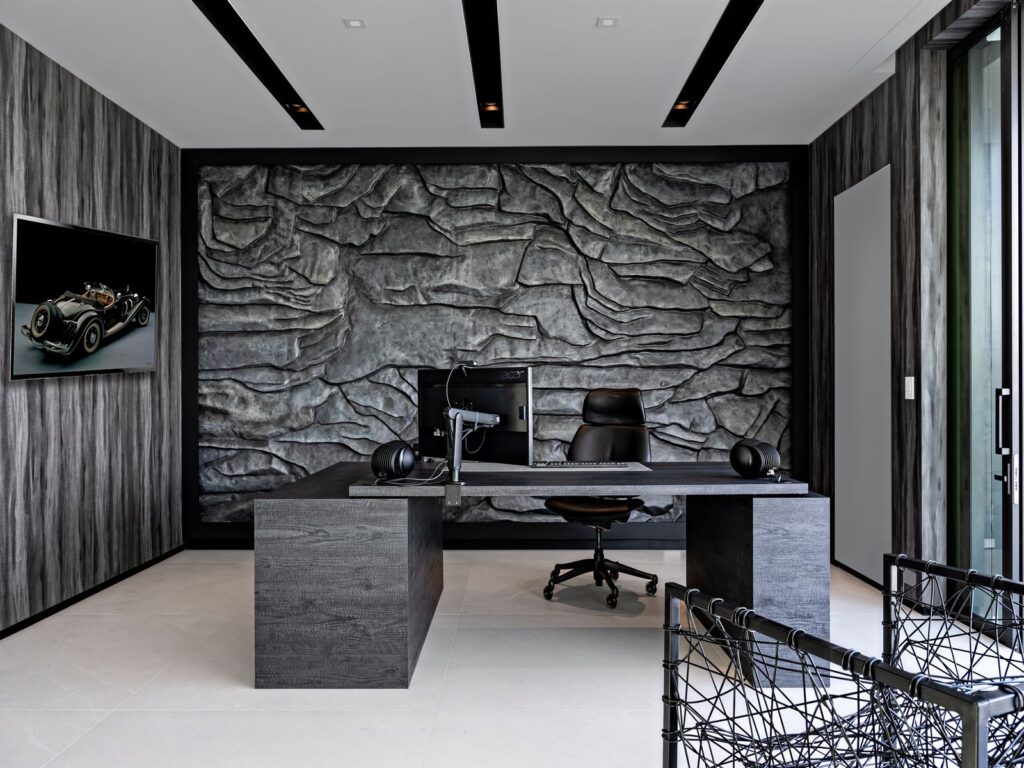 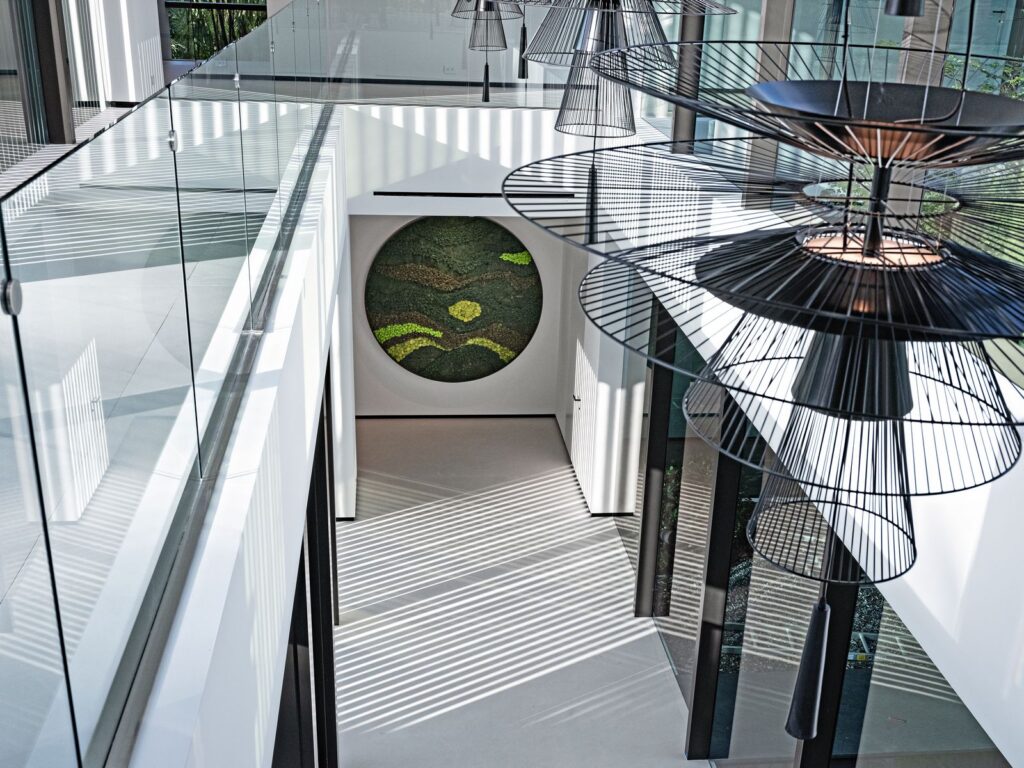 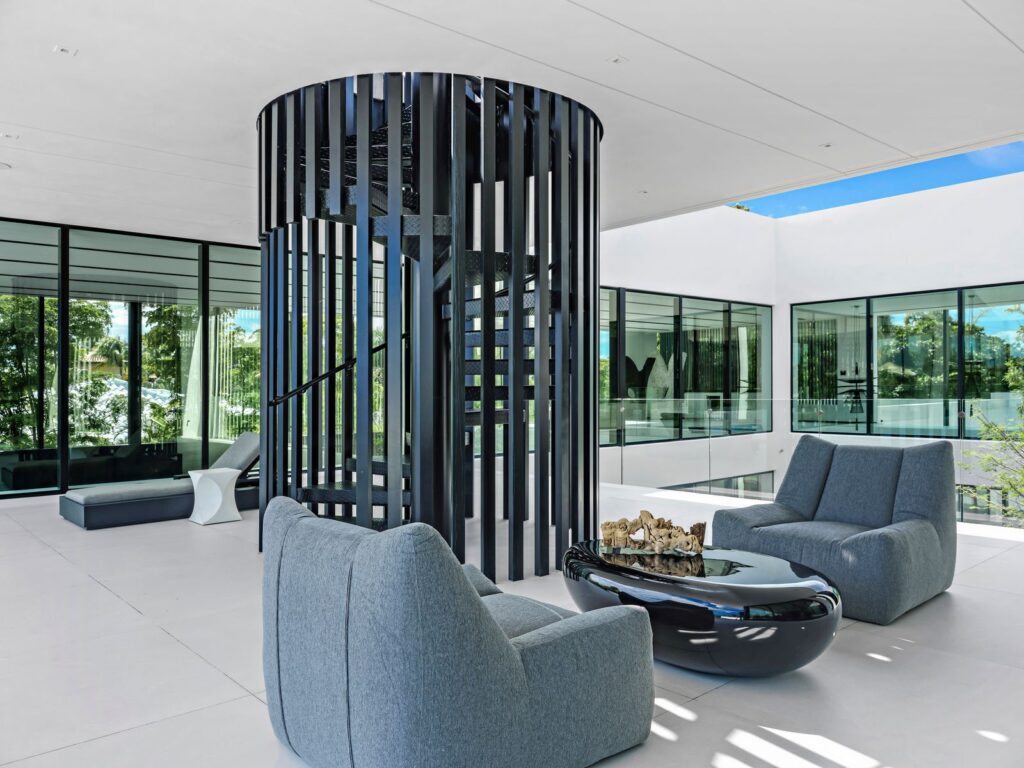 We look forward to getting to know you & helping you design the home of your dreams.

Decorators Unlimited creates timeless spaces seeped in luxury and comfort, reflective of and as unique as the client. We proudly provide international luxury design services to everywhere you call home.

Sign up to receive our newsletter featuring the latest designs, trends and news.

Decorators Unlimited offers a comprehensive design portfolio to ultimately create a space reflective of and unique as the client.

Get The Latest News

Sign up to receive updates from out interior design team.

Decorators Unlimited creates unique spaces steeped in luxury and comfort, reflective of and as unique as the client.

Services are available in English, Portuguese, Spanish, Russian, and more.